When firms are analysing whether to implement a course of action they will often weigh up the reasons for and against implementation. In 1951 Kurt Lewin developed a model that allowed managers to visualise these points. He called it the Force Field Analysis Model. The reasons "for" and "against" implementing decisions are known as forces.


The Diagram below shows an example Force Field Analysis 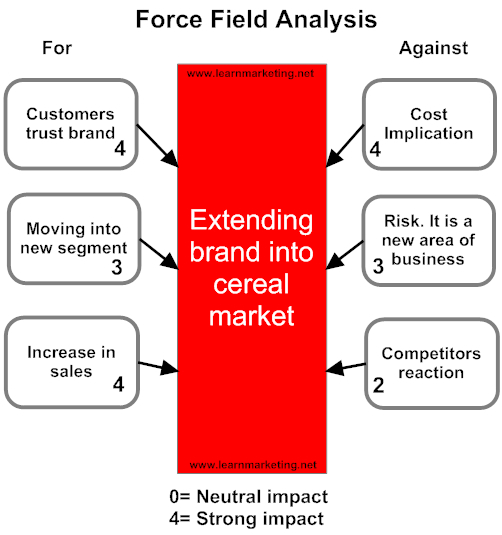 What Does Force Field Analysis Involve

Next allocate each of the forces a rating based on how strong (severe) that reason is. The Force Field force ratings run from 0 - 5 where 0 is a neutral force without an impact and 5 is a strong reason with a strong impact.

In the diagram above, the for and against reasons have been assessed as follows:

As you can see from the table above the final scores are quite close. If the firm would like to extend the brand into the cereal market i.e. make the decision, they could look at ways to reduce the likelihood or severity of the against forces. For example to reduce the risks involved in moving into a new business area the firm could buy a established firm already involved in the business area the firm would like to move into.

Sometimes (for example due to competitor activity or government rules) a firm may have to implement a change even if it doesn't want to. In this instance after a force field analysis exercise the firm should review how it can weaken negative (no) forces and strengthen positive (yes) forces; this will improve the success of the change.

To summarise a force field analysis helps businesses to weigh up the reasons for and against a particular business decision through a visual diagram. The analysis involves assigning a score to each of the forces impacting on a decision. A force field analysis is usually carried out for strategic level decisions rather than every day operational decisions.

If you would like further information about change management visit Lewin's unfreeze-freeze-refreeze approach.