In today's very competitive business environment, firms will try lots of different things to promote their product or service. Product placement involves carefully placing a product in a movie, TV show or video game, with the aim to increase product sales. Manufacturers will pick shows and movies that are likely to be viewed by their target market. Unlike a TV advert viewers will not want to fast forward product placement scenes, as the scenes will be an integral part of the show or movie. People watching promotions they can not fast forward, are known as a "captive audience".. 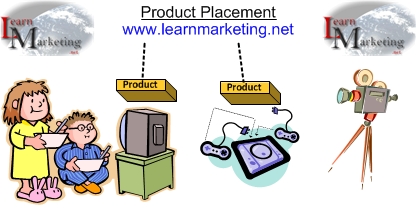 Whilst product placement was widespread in movies it wasn't allowed in UK TV shows until 2007, when the European parliament revised legal rules surrounding product placement in TV shows, broadcast in EU countries. Under the new rules, products can be placed in fictional shows such as drama, soaps and light entertainment. However products can not be placed in factual TV programmes such as documentaries and the news. Product placement in children's shows is also not allowed. Within the UK if businesses have paid to have a product placed in a TV show, the show will have the letter P appearing at the beginning and at the end of the show. The P alerts viewers that firms have paid to have their products placed in the TV show.

There are a number of different ways to use product placement including:

- Where the business (product promoter) sponsors the whole show and its logos and name is mentioned throughout the whole show (beginning, end and commercial breaks). The sponsors branding may also appear in the room that the show is filmed in.

- In 1995 BMW carefully paid to have BMW Z3 in the Bond movie ‘Golden Eye'. This was a hit and sales of BMW Z3 rocketed.

- In the first Transformers movie (2007) all of the cars were provided by General Motors (GM) to influence sales. The movie also featured Apple, Xbox 360 mentions and Hasbro toys.

- A Nationwide Building Society cash machine (ATM) has been placed in the fictional shop in the UK TV soap Coronation Street. Viewers of the soap will see the ATM every time a shop scene is shown in the soap.

- In the Godzilla movie (1998) Pepsi drinks are placed in a number of scenes.

As more people are spending time playing games online or on their consoles, product placement has also moved to the gaming world. Football games have adverts placed within the fictional football stadium, car games have real brands (make and model) of cars for players to select; car manufacturers will pay to have their cars included in the selection. You may get video game characters eating and drinking branded products.

One of the major benefits of product placement is cost. Where it can costs hundreds of thousands to produce and air a TV commercial, there is a one off fee for placing the product on screen. Some manufacturers provide producers with products and services in return for a product placement agreement. In the case of products placed in movies, the benefits can be enjoyed a long time after the film has been released. Each time the film is viewed, the product is advertised to people unlike a commercial which will have a set number of viewings. For TV networks and movie studios, product placement means greater revenues and the money generated from product placement can be used to produce a "better" TV show or movie.

Product placement is here to stay and is on the increase. Next time you watch a TV show and you see characters using a laptop or computer, or sitting on the couch eating a pizza, check out the brands they are using. The laptop is likely to be an Apple or a Dell computer and the food a Domino Pizza. These products have been carefully placed in the show team under a product placement contract with the product manufacturer.